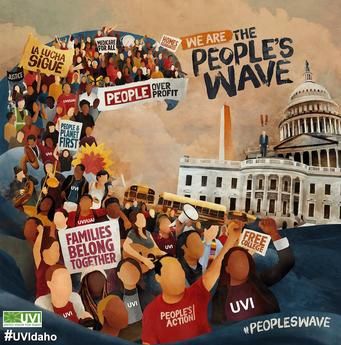 More than ever, we must take our democracy and put it in the people's hands. That means taking to the streets and engaging in civic action to let politicians, and those seeking elected office that they work for us!  We are organizing like never before and Winning!

Our work is moving Idaho and our country from a bold vision to action. UVI's rural and urban progressive populous organizing is part of powerful new movement led by 30 states that comprise 43 organizations of People's Action.

We are crafting policies at the local and national level that center the concerns of rural people and we are winning. In 34 states from coast to coast the #PeoplesWave a powerful force for democracy and economic fairness. Uniting urban, suburban and rural communities coast to coast, we’re fighting for community over greed, justice over racism, and people and planet over big corporations.

What is the People's Platform?
Idahoans across the state created and vetted the list of issues and values that are core motivators for families and communities in Idaho. This platform was ratified and adopted by 34 states including Idaho in 2019.


What do you care most about?

This is the multiracial movement that includes America's working class, poor, and rural communities and uniting communities across America on our shared issues and values state by state.

OUR FUTURE IS WHAT WE BUILD TOGETHER

In 2016, we launched the most robust rural organizing campaign in Idaho's history. We traveled the state for two years meeting with individuals and communities where they live about their fears, struggles and issues. As we did, we formulated a people’s platform that was ratified by the communities we met with. Producing hundreds of thousands of platform cards and door hangers and using deep canvassing we reached thousands of unaffiliated, unregistered and nonvoters constituting more than half of